John Dixon Harvey’s family was well-known in Hempstead, Waller County (formerly part of Austin county), where his dad, Anson Jones Harvey, was a land lawyer and former Confederate veteran. Young John Dixon earned money as a farm laborer to pay for his studies at the University of Texas. Later as a young lawyer in Hempstead, he approached his law practice as seriously as his university courses. Other Waller County attorneys recounted seeing John’s shadow outlined on the office window of the Farmer’s National Bank where John would spend nights researching and studying the law for upcoming cases. In 1915, Judge Harvey was the first appointed judge of the newly created Texas 80th District Court of Harris and Waller counties. The Houston Bar Association members regarded Judge Harvey as “possessing one of the finest analytical minds on any bench”.1 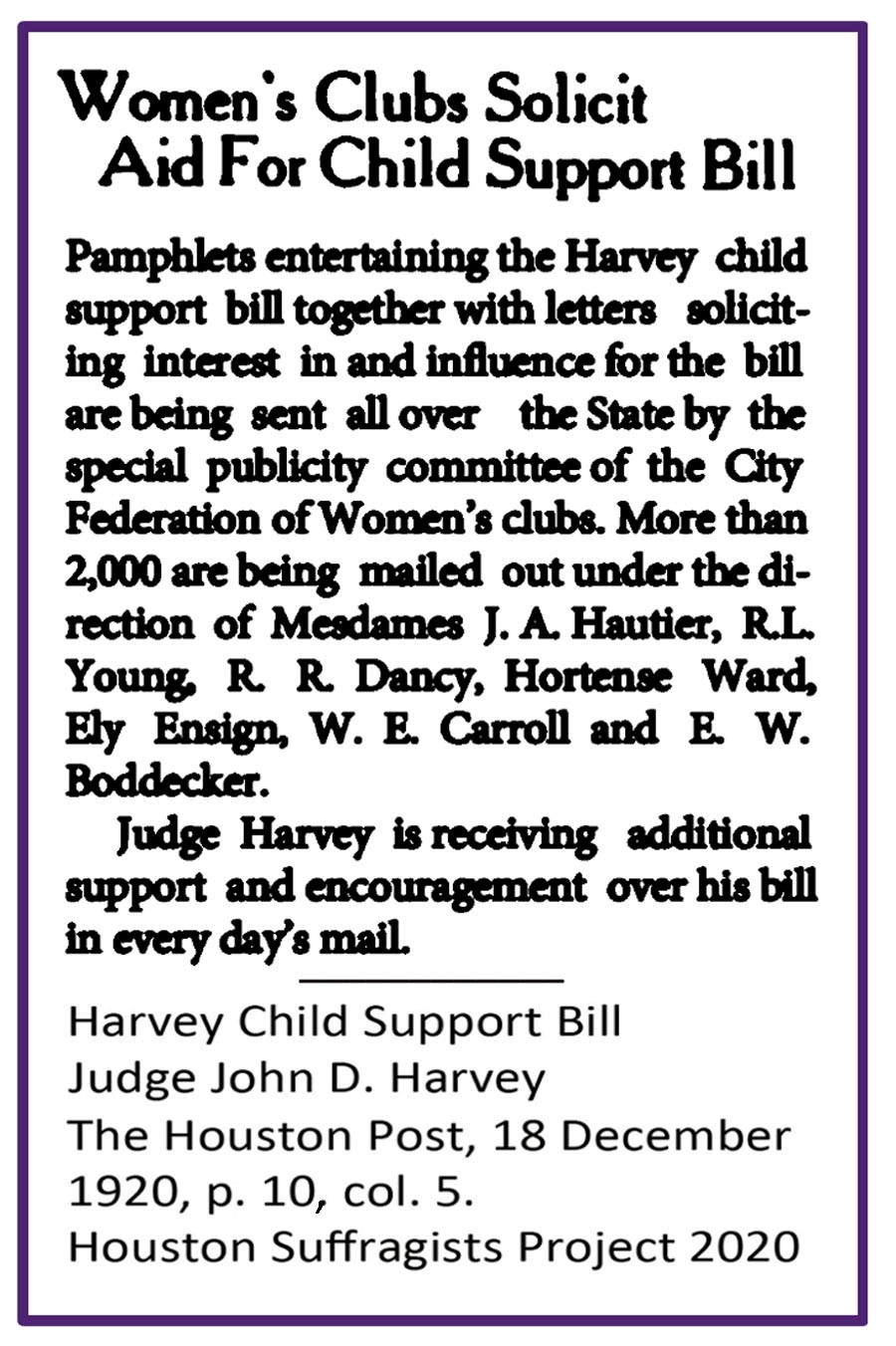 [^Judge Harvey Image] In December 1920, a month after Judge Harvey’s historic Case 91196 ruling for Harris County woman’s suffrage, he sponsored a bill in the Texas Legislature requiring men to pay child support if they were not financially supporting their children after divorce. This bill became known as “Harvey’s Child Support Bill.”2 The bill received the endorsement of almost every women’s club in Houston, yet it was killed in the Texas House in early 1921.3 Another effort in 1924 died in the Texas Senate as well.4

In 1924, Judge Harvey ran for re-election on an anti-Klan platform and lost. Soon afterwards, Texas Governor Miriam A. Ferguson named him to the Supreme Court Commission of Appeals for a six-year term. The commission’s purpose was to hear cases in the Texas Supreme Court backlog. The Commissioners’ decisions would be approved by the Texas Supreme Court or the Court of Criminal Appeals in order to constitute precedent.5 Judge Harvey served for nineteen years until he resigned because of ill health. He died in 1949 and is buried in Austin. He and his wife, Henrietta, were childless and lavished attention on their niece and nephews. The Harvey’s donated funds to support Houston’s orphans.6 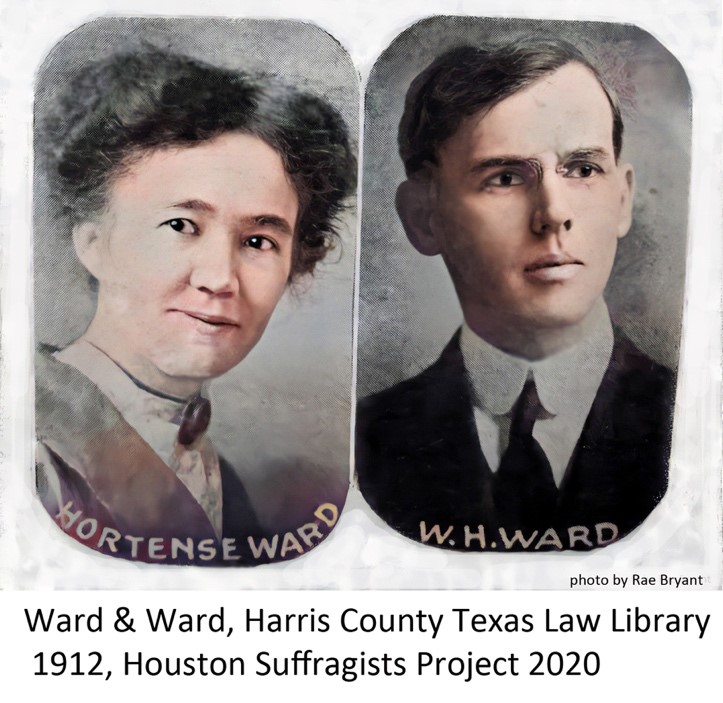 Hortense Sparks Ward and William Henry (W.H.) Ward were a Houston power couple as well as legal partners. W.H. Ward was elected for a four-year term as Harris County Judge in a whirlwind campaign in 1912 when he was 33 years old. He was the youngest Harris County Judge while concurrently continuing as a municipal probation judge. Judge Ward’s positions gave the Wards political and social influence in Houston which was the largest city in Texas.

According to W.H. Ward’s 1939 Houston Chronicle obituary, he was mainly remembered for improving and developing the Harris County road system with a $1,000,000 bond issue. However, a closer look at Ward’s 1912-1916 term reveals he was responsive to women’s concerns. For example, Tuberculosis (T.B.) was a growing problem in Texas with over 5,000 deaths annually. Harris County sent mild T.B. cases to out-state residency locations whereas for severe cases, the city and county paid individuals and families to attend the sick in their homes or in boarding houses. In 1913, the Anti-Tuberculosis League received Judge Harvey’s support to establish a free treatment dispensary and free supplies on county property near the jail. By 1915, a more permanent hospital structure was constructed providing better and more standardized care.

Judge Ward was instrumental in the purchase of the South Houston School for Boys building that housed almost 100 boys assigned through his probation court. As a unique program in the South, boys received vocational as well as academic schooling. Some boys sold newspapers and others were active as Boy Scouts. In contrast to punitive institutions common at the time, this environment encouraged good habits, skills, and socialization, giving youth a chance to be successful adults. Judge Ward supported the Bellaire School for Girls. In one case, he sent a married 15 year old girl to the Bellaire facility. Her attorney insisted as a “married woman”, she was an adult. Judge Harvey disagreed and determined at 15 years old she was a juvenile. During this time, Texas suffragists were lobbying for the Texas law of consent to be raised to 18 years.

In March of 1915, Judge Harvey and Hortense Sparks Ward traveled to Washington for admission to the U. S. Supreme Court bar. They were the first married couple to achieve this honor and Hortense was the first Texas woman lawyer admitted.

Roadhouses outside Houston city limits sold beer. At one of these establishments, Eureka Pines, they sold beer to underaged girls and encouraged them to dance. The county attorney‘s investigation revealed numerous young girls were becoming delinquents and in the resulting hearing, Judge Harvey heard over 50 witnesses including a dozen girls assigned to the Bellaire Girls School. Judge Harvey revoked Eureka Pine’s liquor license and effectively put them out of business which shocked many area businessmen.

After his term ended, Judge Ward volunteered on the Houston/Harris County hospital board formed immediately after World War I to raise funds for the proposed public hospital named for Jefferson Davis in early 1924. Houston did not have a public hospital until this effort raised awareness of the desperate need to have a public health hospital in response to the Spanish Flu epidemic, returning veterans and the needs of the growing city.

William Ward’s early life was not easy. His father died in 1881 when young William was six. From that young age, he worked delivering newspapers and later as a railroad clerk. He graduated in 1902 from the University of Texas Law School and married Hortense Malsch in 1909. He decided not to run for a second term in 1916, but has the distinction of successfully running again twenty years later in 1932 for the same position. His second term is noted for a $4,000,000 bond to improve highways. Active in numerous fraternal and community organizations, he died at 59 in 1939. Harris County offices except for the tax collector’s office were closed so employees could attend Judge Ward’s funeral.

Real estate development has made many Houston fortunes from the time the Allen brothers began selling lots in 1836. 65 years later, Cora and Edward Vincent (E.V.) Ley moved from Iowa to find their fortune in Houston residential real estate development in sections built north of Buffalo Bayou. By 1908, Mr. Ley was developing a large 351 acre subdivision. He became prominent as a developer for opening up Woodland Terrace in 1915 and White Oak Addition in 1923. Cora was an active club woman and American Boy Scout supporter. Today, the Ley name is part of the Houston landscape with Ley Road, Rice University’s Ley Student Center, Rice University’s Ley Track and Field and Ley Family Y.M.C.A.