The right of citizens of the United States to vote shall not be denied or abridged by the United States or by any state on account of sex. Congress shall have power to enforce this article by appropriate legislation.

“Women are Free at Last in All the Land”

After the 19th Amendment went into effect August 26th, 1920, hundreds of Houston’s suffragists officially celebrated “Women’s Victory Day” in Sam Houston Park. Flush with victory, they knew, like other women living in poll tax states, voting was not “free”. The notion of “Women are Free” generally applied to women who could easily afford the $1.50 poll tax, didn’t have to work during the week and lived close to the tax collector’s office. Poll taxes suppress voting for poor, rural and working class people. Two years earlier, the Texas legislature had passed a law enabling women to register and vote in the state and local primaries in the upcoming year, without paying a poll tax. The 19th Amendment now allowed Texas women to vote in all elections, which conflicted with the Texas constitution. Legislators wanted the poll tax to continue. At a special session they crafted a compromise, county tax collectors would combine the 1919 and 1920 poll tax lists and offer a short payment window in October. 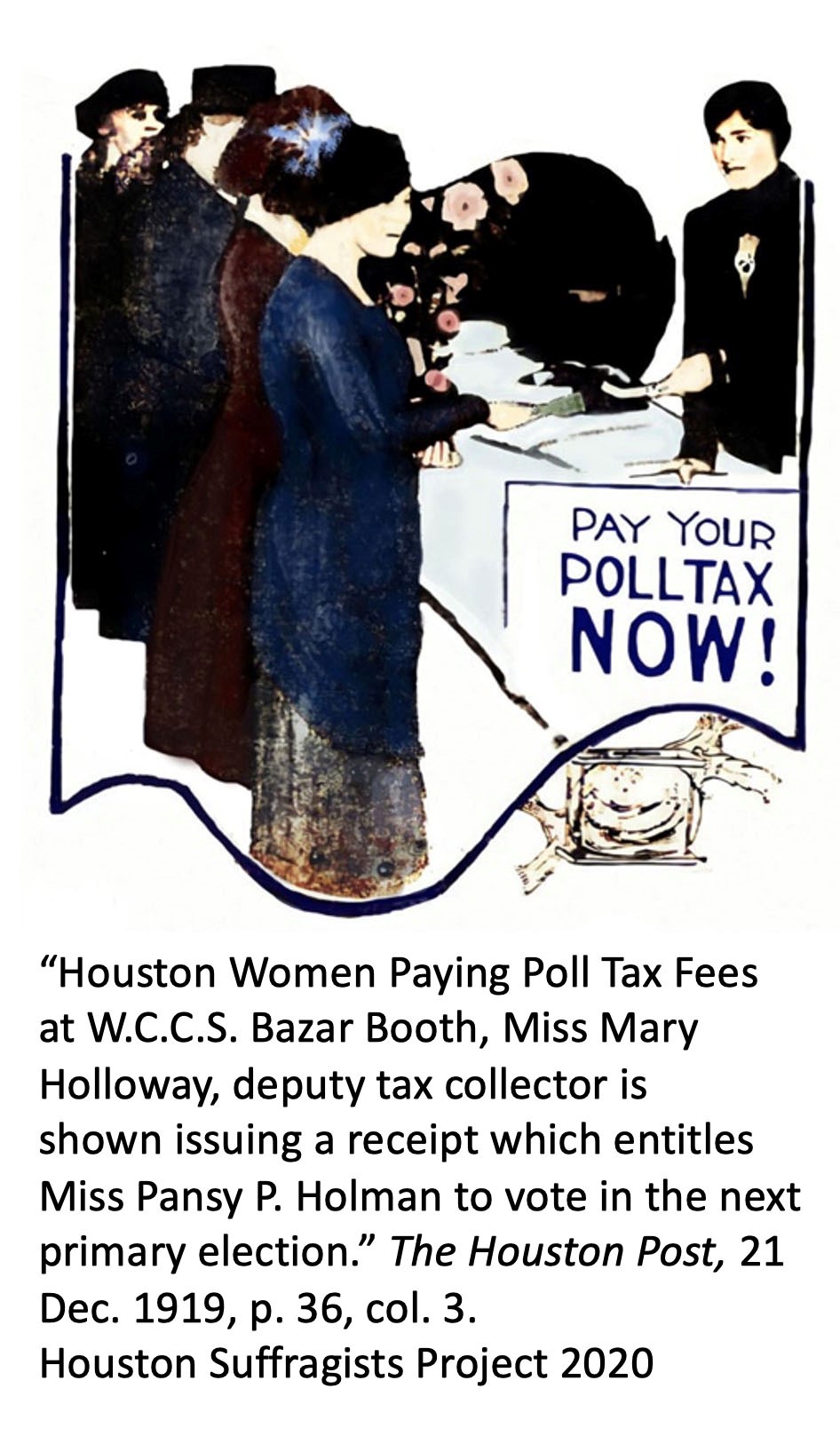 Suffragists expected thousands of women to pay the tax at the tax collector’s office when the two-week window opened in October. To the delight of anti-suffragists and puzzlement of suffragists, interest was low. As a remedy, eleven deputized suffragists set-up payment tables in department stores for potential voters. This new idea is the first example of Houston voter registration tables in public places. Another 1,000 women paid at the tables on the last day, far short of what was hoped after all the years of effort. 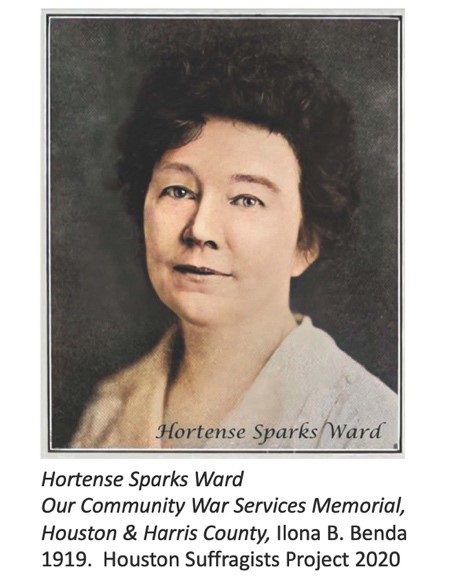 Houston’s most influential suffragist is attorney Hortense Sparks Ward. Unwilling to give up, she crafted a lawsuit challenging the poll tax as unconstitutional. If she succeeded, women could vote for free. Mrs. Mary F. Hinckley, well-known woman realtor in Houston, agreed to be the plaintiff. Mr. E.V. Ley, whose wife was a suffragist, agreed to be the sympathetic defendant. Mrs. Hinckley accused Mr. Ley of violating her 19th Amendment right to vote because he would, as election officer at her neighborhood precinct, refuse to let her vote without a poll tax receipt. Judge John D. Harvey of the 80th District Court agreed to hear the case on Saturday, October 23, only nine days before the election. 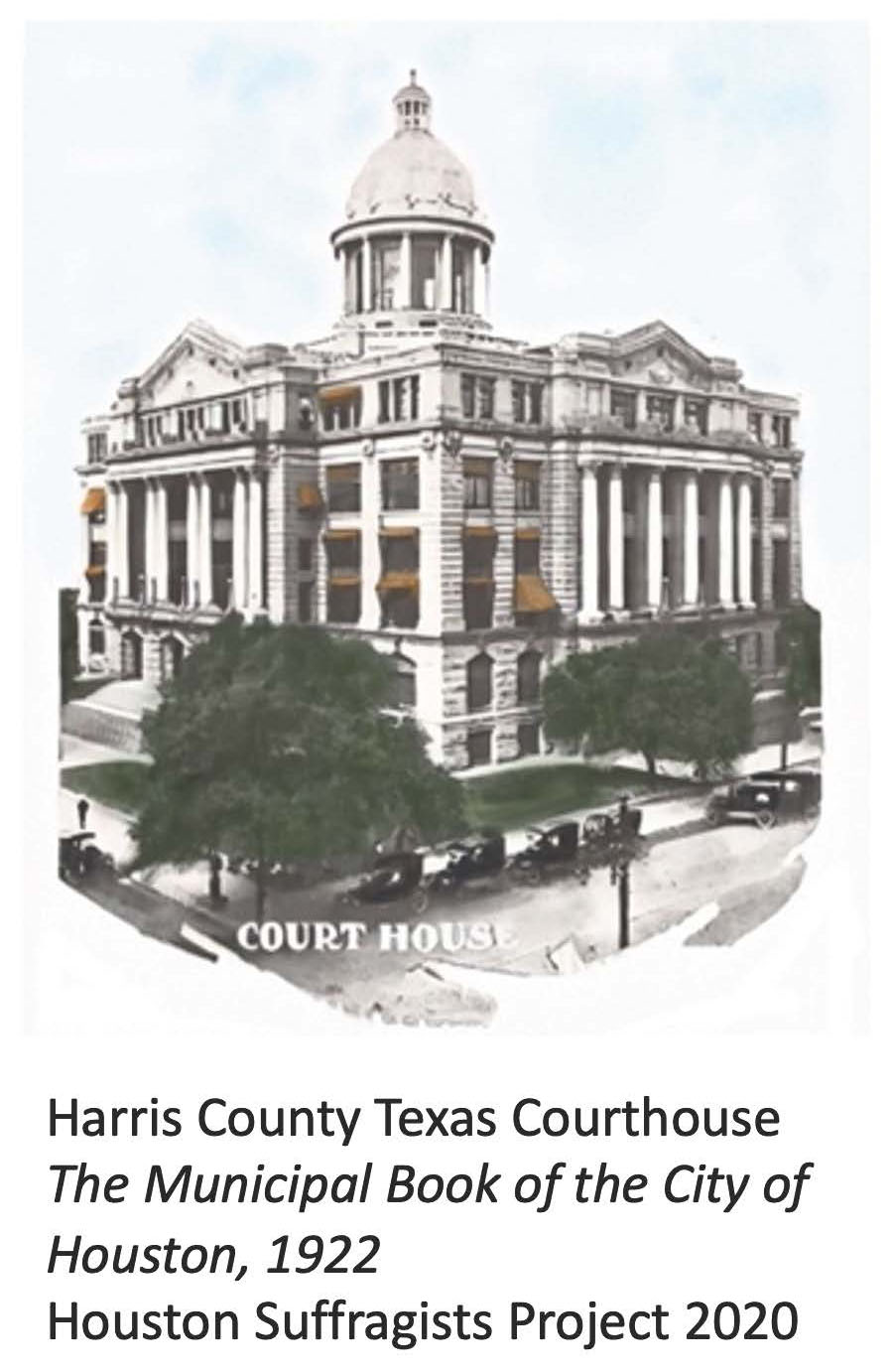 Judge Harvey reasoned the Texas legislature’s compromise plan failed to meet Texas constitutional requirements on three points. First, voters had to pay the tax before February 1 annually to vote. Women did not know before February 1 that they would be able to vote later in the year, so they did not pay. The law prohibits retroactive tax payments. Second, each year the tax had to be paid; the use of the 1919 poll tax list for the 1920 election was another violation. Finally, if the legislature wanted women to pay the poll tax, then the legislature had to add women to the constitution’s voter qualifications. The Texas attorney general quickly issued a statewide opinion that Judge Harvey’s ruling would apply only to the 80th District Court District, which is Harris and Waller Counties. Mrs. Ward wanted all Texas women to vote for free, but only these women had this unexpected opportunity. 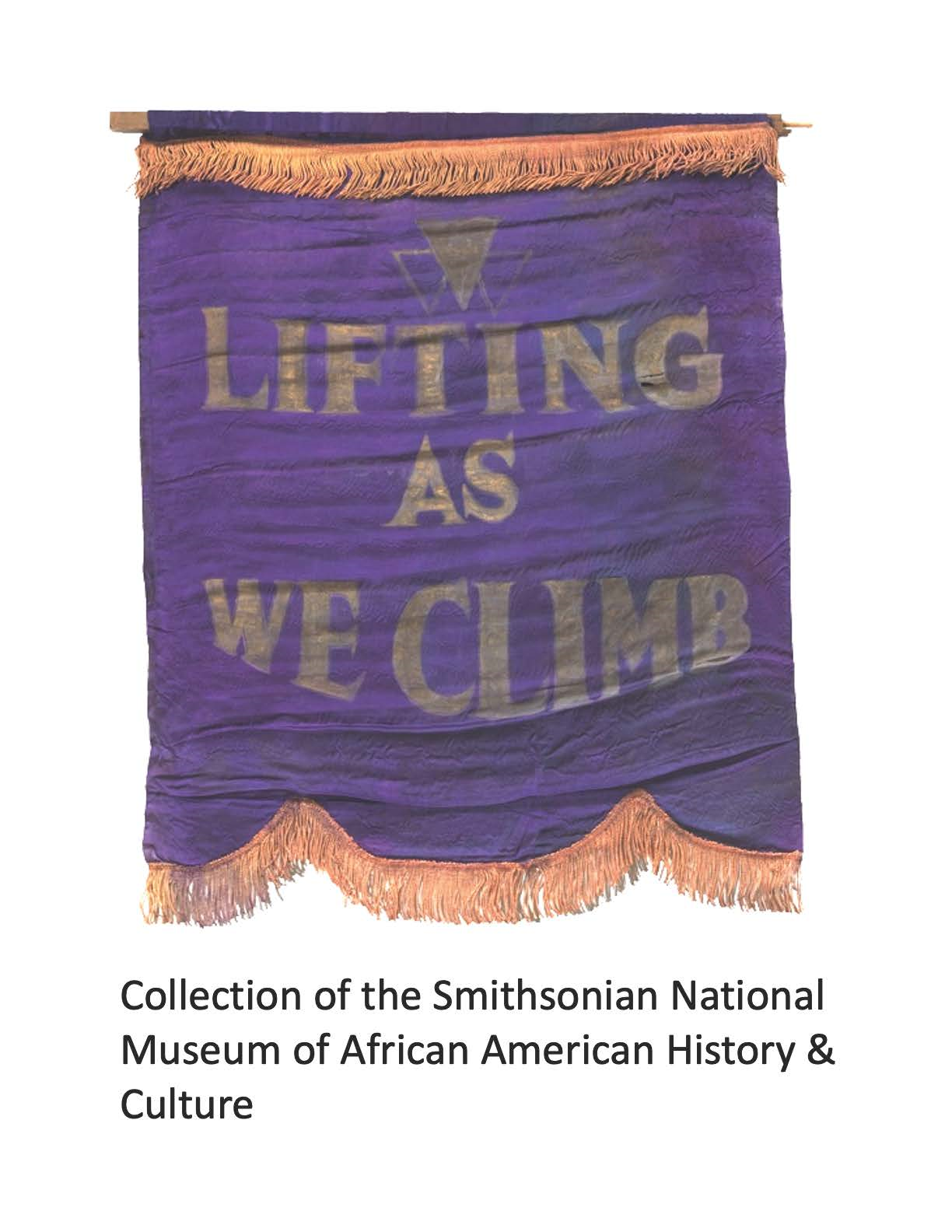 During the 1890’s, The National American Woman Suffrage Association (NAWSA) strongly discouraged Black women’s involvement as a way to attract support from Southern states. Black women formed a suffragist organization, the National Association of Colored Women’s Clubs (NACWC) in 1896 to work with Black men for universal suffrage. After the Civil War, Black men voted with the Republican party. By 1920, the Republican party split into two factions: the “Lily Whites” and the “Black and Tan” or “Black and Tans”. The Houston branch of the National Association of Colored People (NAACP) was chartered in 1918. On August 28, 1920, two days after the 19th Amendment went into effect, the Houston Black and Tans announced a full slate of candidates for the November election. Three candidates were Black women, Mrs. Olivia E. Turner, Mrs. Rosa L. Yocome and Mrs. Florence L. Long. When Judge Harvey’s ruling became public, the Black and Tan increased efforts to teach women how to correctly mark the long ballot and what to expect at a polling place. On the Sunday before the election October 31st, Black and Tan speakers were assigned to every Black church in Houston. They prepared for voting day.

Judge Harvey’s ruling was unpopular with many Houston election officials. Secretly passing a letter around, they planned to turn women away on election day in defiance. When the letter eventually leaked, the suffragist uproar caused one newspaper to observe, “If carried to a conclusion, the opposition to Judge Harvey’s decision will furnish some of the hottest political fireworks Harris County has ever seen. Contempt proceedings against any election officer disobeying the court’s order were predicted…”

“Battle Over Poll Tax is at an End”

Suffragists from over a dozen organizations, sprang into action collecting petition signatures for their resolution protesting the poll workers’ planned action. On November 1st, the day before the election, thirteen plaintiffs, including men, appeared before Judge Harvey. Thirteen woman’s organizations presented signed petitions to the 80th District Court. 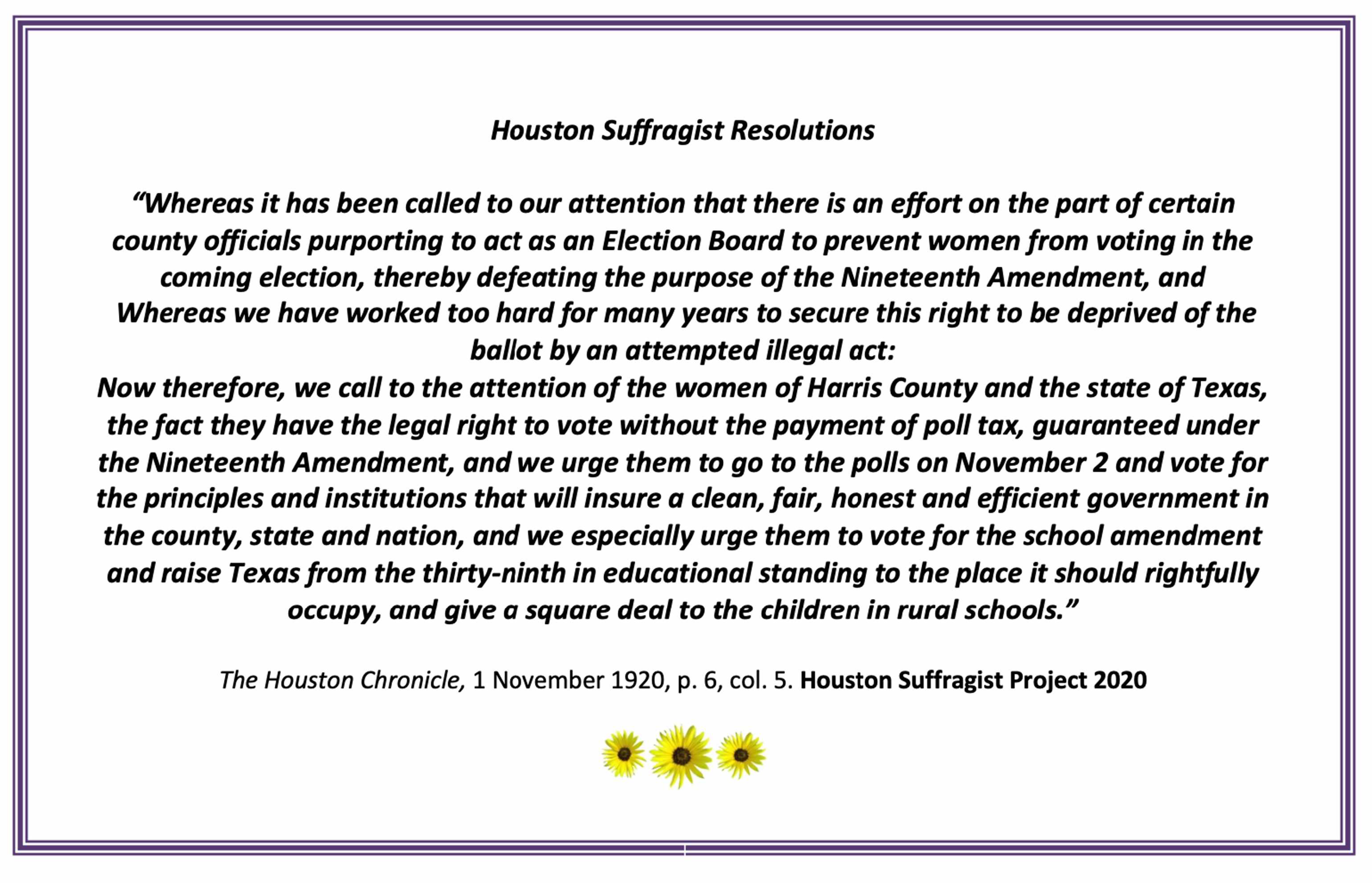 “Mandamus Order to Election Officials to Permit Women to Vote” 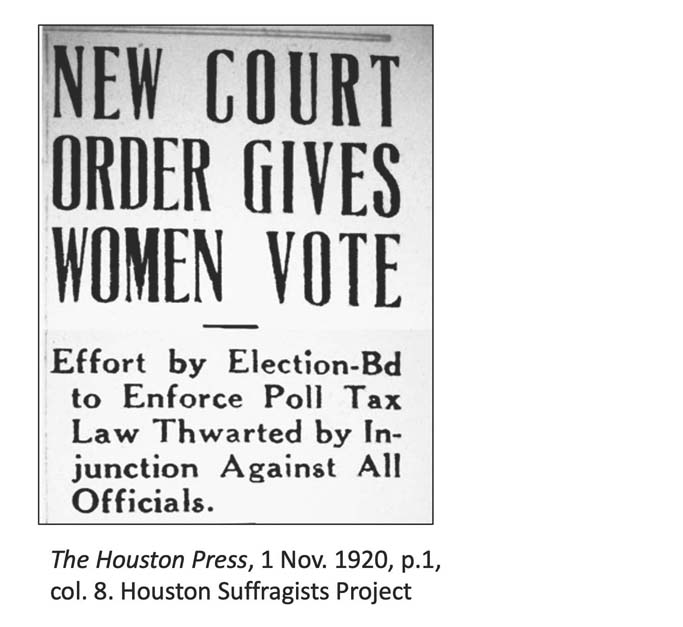 “A new injunction order expressly restraining every election judge, election clerk, and all other persons in anywise connected with the holding of said election from refusing women to vote Tuesday was issued Monday by Judge J.D. Harvey. At about the time Judge Harvey was issuing this sweeping order, County Judge Chester Bryan on behalf of the County Election bd [Board], was issuing a statement instructing election judges not to allow any person to vote without a poll tax receipt…” It was now election eve; tensions were high with the expectation that anything could happen.

The Houston Chronicle’s dramatic descriptions offer an opportunity to experience that day as Houstonians did a century ago. The 100 year old quotations use historical terms which may be offensive.

The Houston Press afternoon edition reports that large numbers of women were voting.

“Thousands of Women Among Early Crowds”

When polling places opened at 8:00 a.m. most precincts were short staffed for the expected volume of voters. Those The men who planned to turn women away failed to show up for work saying they were not being paid enough. Some polling places already had long lines that continued throughout the entire morning. African-American voters easily navigated the complicated marking system and long ballot, surprising election officials. “…the manner in which they are scratching their ballots indicates that they have been schooled on what to do and how to act prior to the elections…”.

Because of heavy voting, ballots the size of a newspaper page, and inexperienced volunteers, the ballot count was slow. It continued through Wednesday and Thursday. The Friday announcement of results shows the November 2 election was the heaviest vote in the history of Harris County. The vote was estimated at 28,766, over twice as many votes as in the 1916 presidential election when only men voted. That year the count was 12,648. The Houston Post estimated 6,000 Black women voted. Sunday’s continuing report by County Clerk Townsend stated that in some precincts the women outvoted the men. He surmised that the unusual vote was the result of the Judge Harvey ruling.

In the African-American areas of Houston, women stood for hours. County Clerk Townsend reported he understood at least another 1,000 Black women were in line when the polls closed and turned away. 1,000 ballots were discarded because they were incorrectly marked. Final election results were submitted to the commissioner’s court on Monday, November 8, 1920, six days after the election.

African-American women turned out to vote in large numbers.

On July 23, 1921, an amendment to the Texas constitution requiring women to pay the poll tax went into effect. In 1964, when the 24th Amendment abolished poll taxes for federal elections, Texas was one of the last five states still mandating poll taxes for federal elections. A U.S. Supreme Court’s decision in 1966 extended the prohibition of poll taxes to state elections. As a result, poll tax requirements were removed from the Texas constitution.

Houston’s courageous Hortense Ward, supported by thousands of suffragists, Black and white, demonstrated commitment to a woman’s constitutional right to vote under the 19th Amendment. Their dream, “Women are Free at Last in All the Land” would not be reality for another 46 years.